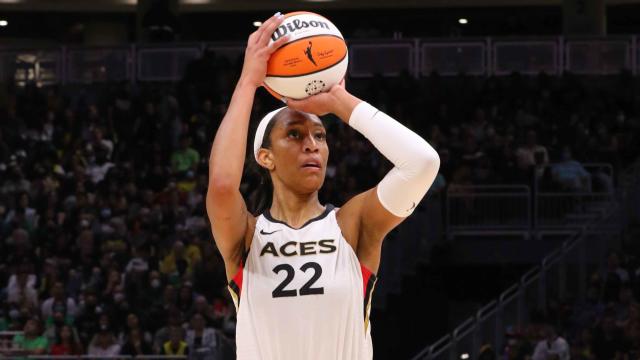 A’ja Wilson has already cemented herself as one of the best players in the league’s history. Her time is now, and she made that clearer than ever this season. Wilson was just named WNBA MVP for the second time in her career.

This year has been considered to be better than the first MVP season she had in the 2020 WNBA bubble. The former Gamecock averaged 19.5 points a game, a career-high 9.4 rebounds, 2.1 assists, career-high 1.4 steals, and a career-high 1.9 blocks this season.

Heading into the 2022 season, Wilson only attempted two threes. She missed the first one in 2019 but would go on to make the second one in the Aces’ season opener in 2021. This season, Wilson shot 37.3 from the field on 83 attempts. That’s pretty efficient for someone adding the deep ball into their game.

Her improved performance and impact on the court made it clear to many that she is the league’s MVP. She has the numbers and has made the most significant impact on her team’s success this season. The Aces finished the season 26-10, tying with the Chicago Sky for the best record in the league.

When the Aces often needed a stop to seal a victory, A’ja was there to swat or alter a shot. Wilson hosted a block party in the Commissioner’s Cup Championship game against the Chicago Sky. She recorded a career-high six blocks along with 17 points and 17 rebounds. This was arguably her best game of the season. In the fourth quarter of that game, Wilson took over and would give the Aces the edge they needed to take home the Commissioner’s Cup Championship.

Her defensive performance was enough to be named the league’s Defensive Player of the Year. That makes her the fifth player in WNBA history to be named DPOY and MVP in the same season.

The Aces have a stacked squad, but what has held them together has been A’ja Wilson. She has been getting it done on both sides of the court. Wilson hasn’t slowed down a bit in these playoffs. She’s averaging 20.5 points, 10.8 rebounds, and 2.3 blocks in these playoffs.

She became the first player to have back-to-back games with 30 or more points and ten or more rebounds. Nobody has been able to slow her down. With her and Chelsea Gray performing at a high level, the Aces have a great chance at bringing a chip to Vegas.

Wilson has won every major accolade in her career so far. The one thing missing from her already legendary resume is a WNBA Championship. The odds are in the Aces’ favor as they are matched up against the Connecticut Sun.

If A’ja Wilson is able to lead the Aces to a championship, the journey she took to get there will be one to remember. Beating former champions and MVPs on her way to her first would be pretty impressive and will insert her into the conversation of greatest players of all time.