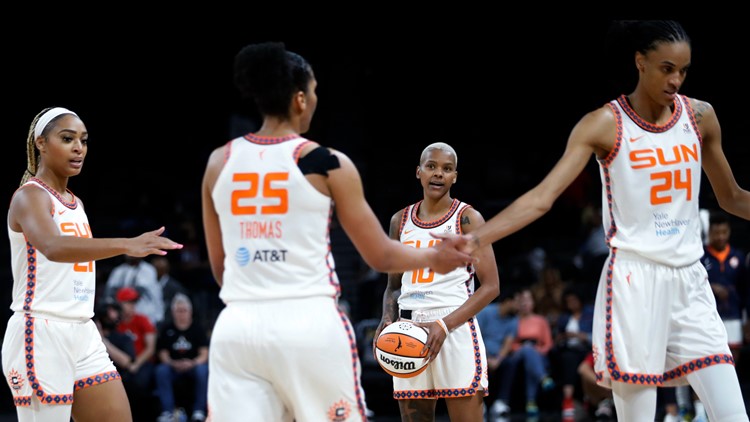 A little over a month into the 2022 WNBA season, it’s becoming clearer what teams are getting labeled as. We now see who the contenders are, who the problems of the league are, and which teams don’t stand a chance. Let’s see where the teams rank amongst each other this week.

The Connecticut Sun Split lost the first matchup with the Las Vegas Aces but would win the second game by seven. This team has shown that they can beat the best of the best and have what it takes to be the best team in the WNBA.

With a loss to the Sun this week, the Aces drop down a spot in our power rankings. Kelsey Plum has played well this past week, getting it done on both ends of the floor. She’s become a problem for whoever she’s facing. A’ja continues to build on her MVP case as well. The Aces have shown anyone can lead them to a win on any given night. It just depends on who has the hot hand.

The defending champions are on a three-game winning streak beating two teams who were in front of them last week. The defense has been vital all season, and the offense is beginning to click more and more with each game.

The Atlanta Dream have continued to be impressive this season, especially Rhyne Howard. Howard was named the WNBA Rookie of the Month for May. This week, they went 2-1 with wins against the Fever and Lynx and lost to the reigning champs. This team has been fun to watch this season, and it’s safe to say they turned things around for the better. It’ll be interesting to see how they end the season.

A tough loss on the road to the Sky without Elena Delle Donne and another at home to the Liberty moves them down the rankings this week. They will likely bounce back, but they need consistency and continuity with their lineup.

The Sparks started the week beating the Minnesota Lynx, then beating the Dallas Wings in one of the wildest finishes to a game ever. Chennedy Carter dropped 20 in her first start with the Sparks. It was good to see Carter give a performance like she gave against the Lynx.

The Wings were two free throws away from overtime against the Sparks. What would follow after Arike’s first free throw made news in all the wrong ways. They responded with an impressive win over the Storm, forcing them to struggle offensively. They lost a tough battle to the Aces in Vegas Sunday night.

The Storm continues to struggle with the Wings. Over the last two seasons, Dallas has given them major problems. They also lost to the Sun, who played in Seattle on a back-to-back. I’ve said that I haven’t been impressed all season, and this week definitely didn’t help. In fairness to them, they didn’t have Sue Bird or Ezi Magbegor, but Mercedes Russell returned, and they still have Stewie and Jewell.

The Minnesota Lynx haven’t been the team we usually know them to be this season, but they have remained competitive. They snagged another win against the Liberty in which Aerial Powers scored 27 points. Powers, Kayla McBride, and Sylvia Fowles have really been giving it their all this season and are why the Lynx have been competitive at times this season.

The New York Liberty won two games in a row this past week, and Sabrina Ionescu has played well. Scoring 20+ in her last three games, could we finally see some consistency from the young guard? This team has looked better but will be without Betnijah Laney for eight weeks. DiDi Richards will be returning soon, so we’ll see the impact she’ll have on the team this year.

The Mercury broke their eight-game losing streak against the Sparks. In large part due to Skylar Diggins-Smith, who scored a season-high 29 points.

Although they aren’t winning, things are still looking up for the Fever. NaLyssa Smith continues to improve, Kelsey Mitchell is having an all-star season, and Queen Egbo continues to surprise. The lessons they are learning this season will help them in the very near future.