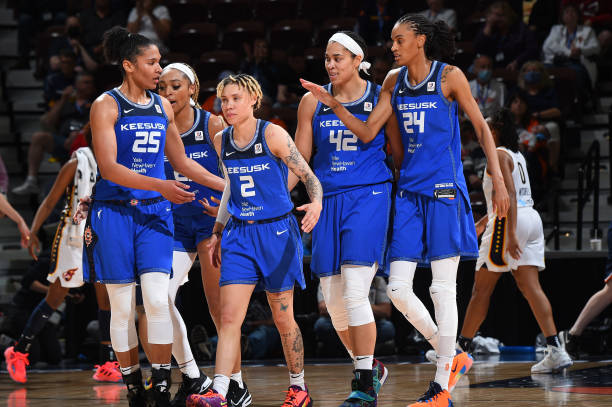 One month into the 2022 WNBA season, we’ve seen who the best teams in the league are. We’re also surprised about the teams at the bottom of the standings because we didn’t think they’d be there before the season started. The first month has been a good indicator of how the rest of the season might unfold. Here are our WNBA power rankings after four weeks of action.

The Aces have continued to show why they are the best team in the league. They stand atop the league standings and are doing so in a dominant fashion. Jackie Young has taken another leap this season, becoming an essential part of the Aces’ success. A’ja Wilson has been playing amazing as well. The team as a whole looks better under Becky Hammon’s coaching.

The Connecticut Sun is still the beast of the east. They are the second-best team in the league with a 6-2 record. With wins against the Wings and the Mystics last week, the Sun have continued to be a force to be reckoned with. Look for them to be battle-tested in these next couple of games as they play the Las Vegas Aces twice and the Seattle Storm.

The Wings are hard to get a gauge on. They have a net rating of -0.3. Can they keep just outscoring opponents most nights? They have thus far, but that is difficult to do when you are playing against the top teams who can be elite defensively. They split with Connecticut, and we saw the two versions of Wings basketball.

After losing back-to-back games to the Washington Mystics, the Atlanta Dream bounced back tremendously in a blowout victory against the Phoenix Mercury. Rhyne Howard has continued to be impressive, and the team as a whole has improved from last season.

The Storm’s record indicates they are one of the best teams, but I’m still not sold. They beat the Liberty twice, and that team is last in the league and on a seven-game losing streak. That’s not to discredit Seattle, but they do have some glaring issues they need to fix if they want to bring another championship to Seattle.

Finally, the Sky are getting all of their players. A fun debut from Li Yueru in the game against Vegas may have been the lone highlight. At one point, they missed 18 straight three-pointers. As bad as they have played in their games against Seattle and Vegas, they had a shot at winning both. They can’t continue to lose these games though.

The Fever moved in another direction at head coach with their new guy at the helm Carlos Knox. This came after a great effort against the Sky, where they lost by just five points. They made sure he was able to celebrate his first win against the Sparks. NaLyssa Smith returned to score 17 points.

The Sparks are still trying to find out their identity as a team. They went 2-2 last week, losing to the Aces and the Fever and winning against the Mercury and the Lynx. The Sparks are experiencing some lineup changes. Chennedy Carter played well in her first start with the team. Lexie Brown has been good for the Lynx too. When this team finally figures it out, they could go as far as Derek Fisher wants to take them.

With the many changes and the absence of star Napheesa Collier, the Lynx have continued to come up short. Collier recently gave birth to her daughter, so it is a possibility that we do see her play at some point of the season. This past week, the Lynx got their second win of the season against the New York Liberty and lost a close one to the Los Angeles Sparks. They play the Dream and the Liberty this week, so it could be a good time for them to bounce back.

Phoenix lost a close, high-scoring game to the Sparks, then came out and got demolished by the Dream. The Dream literally ran them out of Atlanta, and no one on Phoenix gave real effort besides Diamond DeShields. They need Skylar Diggins-Smith, Tina Charles, and Diana Taurasi to be better; there’s no sugarcoating it.

It’s really disappointing to see the Liberty become the worst team in the league. Especially since everyone thought they’d be better. College stand-out Sabrina Ionescu hasn’t quite lived up to the hype yet. She’s continued to be inconsistent, and it is hurting the Liberty. But they are without their star Betnijah Laney due to injury, and their schedule has been pretty tough. Maybe they can turn things around soon.