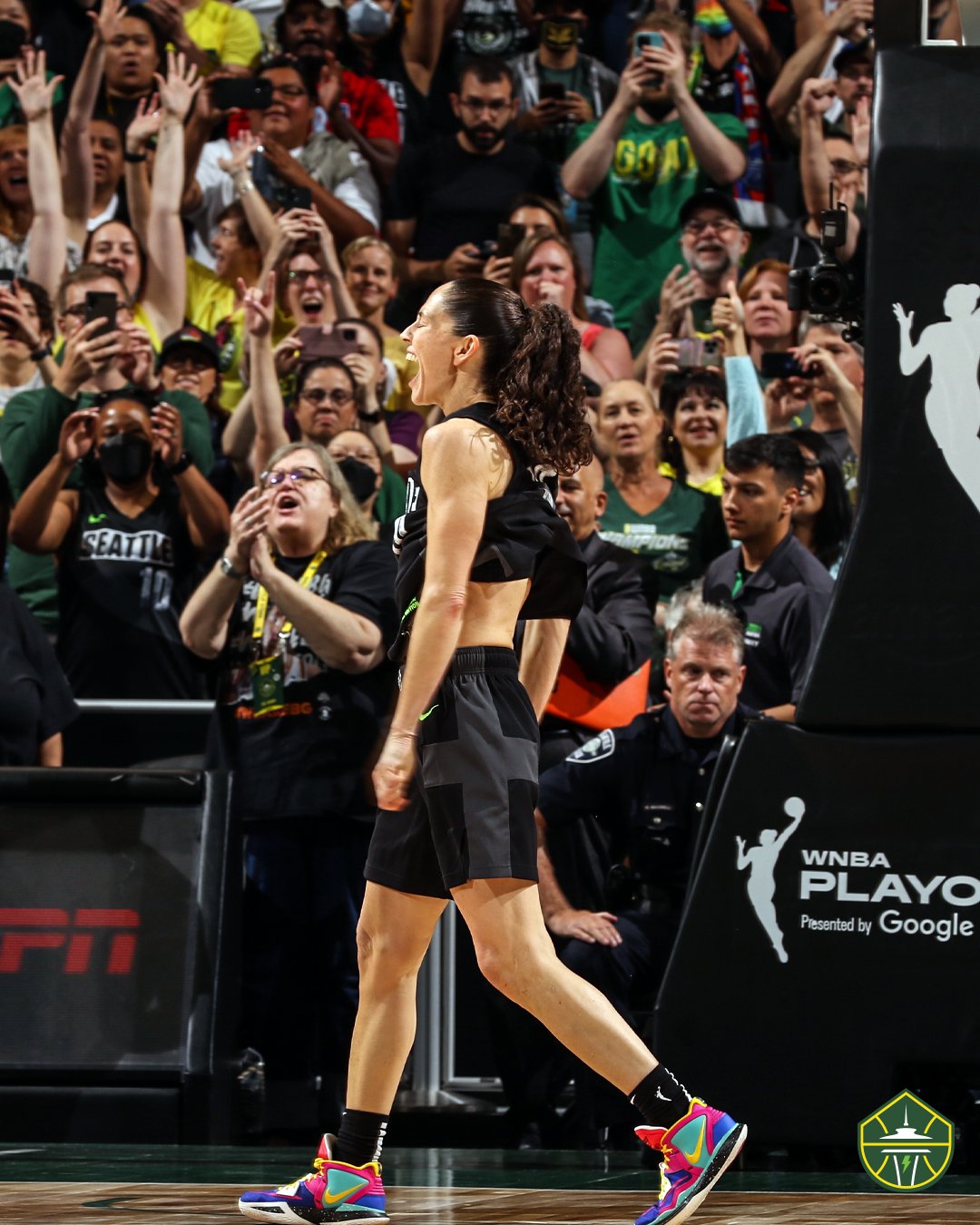 The first round has concluded, and we’ve got two fantastic matchups. These are probably the four teams almost everyone chose to be here before the season started. The Aces are looking to finally get over the hump and win a championship. The Sky are looking to be the first team to repeat as champions since the Sparks in the early 2000s. The Sun are looking to move past their playoff failures, and finally win that elusive championship. The Storm are healthy, and looking to retake their place atop the throne. Both series should be great basketball on display, offensively and defensively, just elite players at their best. This is where the great players separate themselves, who will be ready for the moment?

The Las Vegas Aces took care of business against the Phoenix Mercury. The Mercury gave it all that they could but it wasn’t enough to stop the Aces from sweeping them. Chelsea Gray played phenomenal in both games against Phoenix. She averaged 19.5 points, 3.5 rebounds and six assists. Her performance was essential in the Aces advancing to the next round. A’ja Wilson, Kelsey Plum and Jackie Young have continued to be the strong core for the Aces along with Gray. Kiah Stokes had a great game in game one. She grabbed 13 rebounds scored eight points and had three blocks. The Aces looked like themselves in the first round and their role players stepped up in the absence of Dearica Hamby. Hamby should be available for the semifinals. They will be up against an opponent they know all too well. Their upcoming series against the Seattle Storm will be one to watch.

The Seattle Storm were battle tested by the Washington Mystics. Both teams had the same record and many thought that the series would be decided in three games. Game one was a close game that went down to the wire. Jewell Loyd came through for the Storm down the stretch. She made some tough shots to help them secure the win. Breanna Stewart was a problem for the Mystics. She had a double double in both games and led the team in scoring. She has continued to be a force and show why she’s one of the best players in the league. Sue Bird showed up big for the Storm as well. She averaged 14 points and got a double double in the second game. Tina Charles has been a great addition for the Storm. She has been a big help on the boards and has defended well. Things that are definitely going to be needed for a matchup against the Aces

These teams have matched up against each other in some capacity every year. It has been the closest thing to a rivalry the league has seen in recent memory. A’ja Wilson and Breanna Stewart have been the focal point of this season’s MVP conversations. We’re still a ways away before we find out who’s the league’s MVP but the comparison will be as big as it has ever been. The matchup will live up to the expectations as well. Both teams are stacked with talent and have a lot to play for. For Seattle, they want to show that they are still one of the league’s best teams and send Sue Bird off with one last championship. For the Aces, they want to show that they have what it takes to bring a championship home to Vegas for the first time in franchise history. The last time the two teams met in the playoffs, Seattle swept Vegas in the Wubble. But that was two years ago and the teams look much different now. The Storm added Gabby Williams in the offseason and acquired Tina Charles after her contract divorce with Phoenix. The Aces on the other hand have added Chelsea Gray, who has been a big part of their core since she signed to the team in 2021. Both teams match up well against each other, and it will be interesting to see how they respond to each other. The Aces will have Dearica Hamby return to the lineup at some point of the series and many are intrigued to see how she comes back. For once, the Storm are the underdogs and will definitely be playing with a chip on their shoulder. This has the potential to be a classic series.

Bryce: This series will have me on edge for the duration of it. This series is so important to the Aces and they know that. It will bring them a step closer to their first championship. Therefore I my predictions is Aces in 5

Tariq: My heart says Aces in 5, and my head says Storm in 5. I’m going to go with my heart on this one.

The Chicago Sky had to win two elimination games in a row after falling to the Liberty in game one. New York ended that game on a 13-0 run. Chicago won game two handily, 100-62. They physically imposed their will and dominated from the opening tip-off. They won the first quarter 31-10, and never looked back. The 38-point win was the biggest in WNBA Playoff history. Kahleah Copper led the way with 20 points, and some terrific defense on Sabrina Ionescu. They forced 19 turnovers and for the Liberty to shoot 33 percent from the floor. Rebekah Gardner and Azurá Stevens combined for 25 points off the bench. Game three was in New York, an electric crowd made for an incredible atmosphere. Both teams came out with energy, but the Sky jumped out to a lead, and led by twelve at halftime. In the fourth quarter the Liberty came within five points, after a run by Ionescu. The Sky answered with a championship 16-0 run, and went onto win the decisive game three 90-72. Candace Parker nearly had a triple-double with 14 points, 13 rebounds, and eight assists.

The Sun also had to battle through a three game series, against the Dallas Wings. Many believed Connecticut would easily win the series, but some of their playoff woes nearly came back to bite them. After dominating game one and winning by 25, it seemed that the series would end in Connecticut. Dallas had other plans, winning the first quarter of game two 24-7. They led 76-47 headed into the fourth quarter, and the Sun went on a 22-2 run but the comeback was too late. The pressure really was on the Sun, having a game three on the road in Dallas. They struggled in the first half of game three, but were able to turn it around in the third quarter, winning it 23-12. Their defense really stifled Dallas and made them question everything offensively. The Sun are where they are supposed to be.

It’s a rematch of the semifinals from the playoffs last season. The underdog Sky won that series in four games, 3-1. The Sky won the season series this year 4-0. All four games were close, three coming down to four or less points. It seems like the Sky has the Sun’s number, but you can’t count them out. In the first matchup of the season, the Sky won 83-79, with Emma Meesseman leading the way with 26 points. The second matchup Chicago won 91-83, thanks to a 25 point, 11 rebound performance from Parker. The Sky had five players score in double figures and shot 59 percent from the field. Jonquel Jones and Alyssa Thomas added 24 and 23 points respectively, along with Bri Jones scoring 18 off the bench. The third matchup went to overtime, and again the Sky came out on top, 95-92. Copper scored 27 points, and Chicago scored the final nine points in the game. Not to mention, the game was won without Parker who was out due to illness. Five players scored in double figures once again, and two had double-doubles. Matchup number four was won by Chicago 94-91. Courtney Vandersloot had 20 points and four assists, while Parker had 18 points, 12 rebounds, and five assists. As you can see, every game was close, it just came down to the final few possessions. So it’s not as cut and dry as you may think. The Sun could easily turn around their late-game struggles against the Sky, and that makes this series very interesting. The Sky clearly are able to run their offense well against them and get the shots they want; but the Sun are able to do the same, it comes down to the last five minutes and that will decide who wins this series.

Tariq: If you know me, or have been reading my articles the last few years you know my feelings on Candace Parker. No shot I’m picking against her; so just like last year, Sky in 4.

Bryce: The Sky have been great all season and I don’t see them slowing down any time soon. That being said, Sky in 4