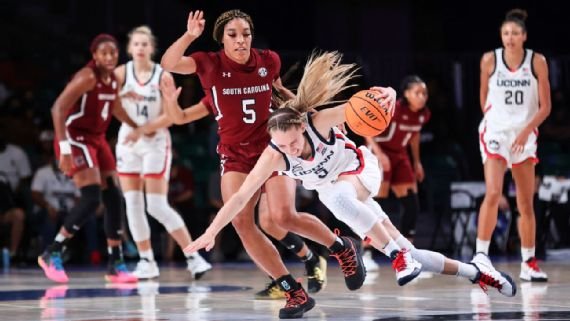 The stage is set. The top team in the nation, South Carolina, will be facing off against the No.2 seed, the University of Connecticut. Two of the best women’s basketball programs in this current era will be competing for the 2022 NCAAW National Championship. But before we preview the game itself, let’s take a look at how both teams made it to this point.

Coming into this season, the Gamecocks had one thing in mind. After falling to Stanford in the Final Four last season, they made sure they did everything in their power to run it back. This year has been a special one for the Gamecocks. All year they dominated their opponents and were the No.1 team in the nation for the majority of this season. UofSC has only lost two games so far.

This has arguably been the best team that Dawn Staley has coached in her career. In the regular season, Coach Staley and the squad beat 11 AP ranked opponents, sending the message that they are the team to beat this year.

Aliyah Boston has been amazing all season. She was recently named the Naismith Player of the Year and the Defensive Player of the Year. Boston also set the SEC record this season for the most consecutive double-doubles with 27. With her leading the charge for the Gamecock, it was nearly impossible to contain them this season.

UConn, on the other hand, has had quite an interesting season. Coach Geno Auriemma has been very critical about this team and said they are not like any of the other teams he’s coached. He’s called this group of talent ‘stubborn’ and has talked about how hard it is to get Sophomore guard Paige Bueckers to listen.

Bueckers missed time during the season due to an injury that could have easily been avoided. This hurt the huskies as they struggled to find their identity, but they were able to find their way.

UConn ended up as a No. 2 seed and handled business throughout the Tournament. But before they punched their ticket to the Final Four, the Huskies had to battle it out against North Carolina State. The game was one of the best games of the tournament. Bueckers came through in the clutch. She made some big plays in the fourth quarter and in the overtime periods.

This game is a regular-season rematch where Carolina was able to take home the win in the early season matchup. The two were supposed to play again in Colonial Life Arena, but with Bueckers’ injury, both teams felt like the game wouldn’t have lived up to the hype it once did, so they didn’t play the game. But now, on the biggest stage of them all, they get the game everyone wanted to see.

The matchups will be fun to watch—especially the guard matchup between Zia Cooke and Destanni Henderson vs. Paige Bueckers and Azzi Fudd. Paige will also be playing in front of her home crowd in Minneapolis.

This game definitely has the potential of being an instant classic. Two legendary coaches and two great programs are going at it for the National Championship. It can’t get any better than that.