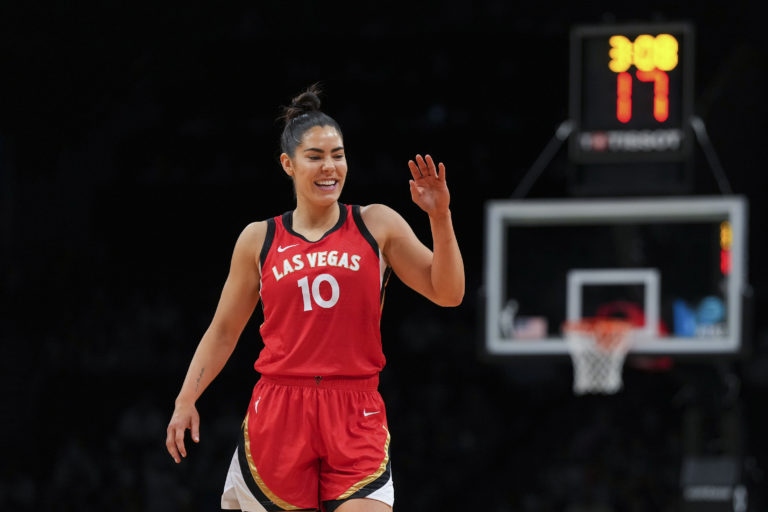 Kelsey Plum has been an absolute killer this season, making this year the best she’s had in her young career. Plum has steadily improved each year but has taken the most significant leap this season. The 2021 WNBA Sixth Player of the Year has shown this season that she has what it takes to be mentioned amongst the best players in the league, emerging as a household name.

This year, Plum is averaging career-highs in all statistical categories and leading the team in scoring. Her improved numbers have come as an effect of her being reinserted into the starting lineup this year.

Plum starting has been significant for the Aces because she has been able to help them get off to quick leads to start games this season. The team as a whole has been playing at a faster pace in Becky Hammon’s offense.

Plum was named an All-Star for the first time in her career this season and deserved it. She was selected as a starter and would win the WNBA All-Star Game MVP.

Plum has also been in the conversation for league MVP this year, along with teammate A’ja Wilson and Seattle Storm big Breanna Stewart. This is no surprise because her performance this season has impacted the Aces’ success, and she has been one of the best players in the league this season. Her play this year should earn her an All-WNBA first-team selection.

Recently, the Washington guard signed a two-year extension with the Aces. It’s good to see that she has become one of the cornerstones of this team’s core. Plum has what it takes to become one of the best players for the franchise in its short history. She will be a crucial piece for the Aces as they look to finish the season strong and make a run for their first championship.

The last time the Aces were in the finals, Plum was out due to her Achilles injury. So it is without a doubt that she would want to do everything she could to get them back there, especially since they were a possession or two away from the finals last year. With less than 10 games left in the regular season, look for Plum to finish the season better than she started.