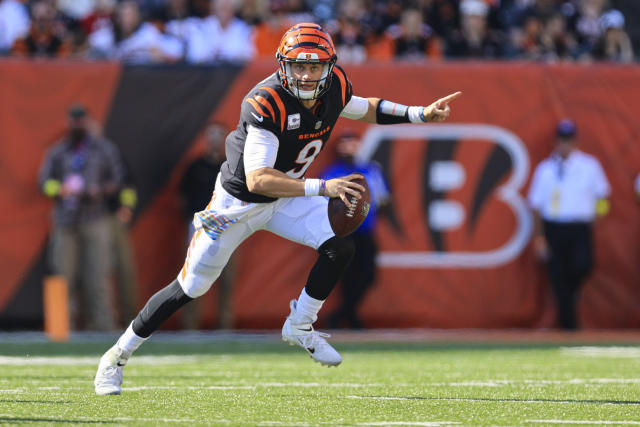 Welcome back to Week 7 of the NFL newsletter. To be honest, I’m shocked you’ve come back for another week of my madness. But that just makes me appreciate you even more. Thank you.

My weekend was pretty boring and uneventful, just did some housework and drank a lot of tequila. Speaking of, if you haven’t tried it already, get yourself some “Don Ramon Reposado,” thank me later.

I do have some awesome news before we get into Week 7 of the NFL. Once again, I am the winner of The Biggest Loser and have a special punishment for pre-diabetic Michael Carter-Williams. Tune into last week’s episode to see what punishment Greg handed out, and don’t forget to subscribe to the Multiplicity Media YouTube channel to stay up to date with The Biggest Loser and all of the other content from this amazing roster.

This was a sloppy yet entertaining game of football, and for the first time in three weeks, we witnessed multiple touchdowns scored in a TNF matchup. Surprisingly, this was also the highest-scoring TNF game all season. The game started out slow, but the second quarter brought a lot of action.

Arizona scored a touchdown, converted a two-point conversion, and recorded two pick-sixes to jump out to a 28-14 lead at halftime. The Saints kicked a field goal with slightly less than a minute left in regulation to cut the lead to eight but failed to recover the onside kick and lost 42-38.

DeAndre Hopkins made his season debut after serving a six-game suspension and caught ten passes for 103 yards. Andy Dalton threw four touchdown passes in a single game for the first time since Dec. 12, 2019.

I keep telling yall about the second-half adjustments from the Giants coaching staff, and once again, they proved me right. The Jaguars were limiting the ground game for most of the game, but in the second half–mostly in the fourth quarter–the Giants finally broke through. Both Saquon and Daniel Jones rushed for over 100 yards, with the latter scoring a touchdown as well. The Giants also played terrific defense in the second half. Although, multiple penalties–including one that negated an interception–on Jacksonville’s final drive almost cost them the game.

Say what you want about DJ, but he continues to make the right decisions and protect the ball, and he’s proven time and time again that he got that dawg in him. His numbers don’t always pop out at you, but he’s one tough SOB.

The Lions led 6-3 at halftime, so that tells you all you need to know about the first half. Dakota was pretty efficient in his return, but they couldn’t find the endzone until the backfield started to take over. Dallas got the run game going and scored 21 points in the second half. The Cowboys’ defense also started clicking and turned up the pressure in the second half. They forced FIVE turnovers in the second half, including a fumble at the one-yard line.

This was a pretty uneventful game, but Derrick Henry did rush for 128 yards, making that three consecutive games with 100+ yards. The Colts got Jonathan Taylor back from injury, but he wasn’t much of a factor. Matt Ryan was back to stinking it up and suffered a shoulder injury. To throw salt in the wound, head coach Frank Reich announced on Monday that Ryan won’t regain the starting job when healthy and will be put on ice for the season.

The Packers stink. It’s time to clean house. Fire the GM and the coaching staff, and let Rodgers walk. The Packers have struggled to generate offense all season, and those struggles continued on Sunday against a Commanders team that had allowed 135 points through the first six weeks. Tyler Heineckie outplayed AR12, and ONCE AGAIN, Matt LaFleur seems like he has no game plan. We all knew this team wouldn’t be the same after losing Davante Adams, but this is just disgusting behavior losing to the Commanders and falling to 3-4 on the season.

The Bucs might be the most inconsistent team in the league. They started the season 2-0 but fall to just 3-4 after Sunday’s loss to the Panthers. On the heels of firing their head coach and trading away their two best playmakers on offense, the Panthers scored the most points since their week three matchup against the Saints. The two key takeaways from this game are Tom Brady is washed, and the Bucs are frauds. I’m convinced he didn’t really wanna continue playing football he was just trying to get away from Gisele.

This was the hard-fought, back-and-forth type of game you expect to see from divisional opponents. The game wasn’t too exciting, but it was a dogfight that fans could appreciate. The Browns had a chance to tie it twice, but the Ravens blocked a 60-yard field goal attempt with just over two minutes left. Cleveland got the ball one last time with less than a minute left but fumbled the ball on their final drive.

Russell Wilson missed the game with an injury, so I thought there was a chance we’d see a better version of the Broncos’ offense. Man, was I wrong. Both defenses played a solid game, but it was New York who came out on top. The Jets won a fourth consecutive game, but their victory came with a price. New York announced on Monday that rookie sensation Breece Hall will miss the rest of the season with an ACL and meniscus injury.

The Texans just might be the worst team in the NFL, and the Raiders aren’t too far off. Swap QBs, and their records are probably still the same. Yes, the Raiders exploded for 21 points in the final quarter and won the game by 18 points, but they struggled to generate much offense through the first three quarters against one of the worst teams in the league. Josh Jacobs had a helluva day, though, rushing for 140+ yards for the third consecutive game and recording his first three-touchdown game since week one of the 2020 NFL season.

The Seahawks continue to impress and win games they have no business winning, and the Chargers continue to disappoint. The Chargers were favored by five points but got smoked by 14 points. Rookie running back Kenneth Walker III had his way with the Chargers rushing for 168 yards and two touchdowns, including a 74-yard touchdown run. As of this season couldn’t get any weirder; Geno Smith now ranks in the top ten in passing yards as well as touchdowns, and Tom Brady is the only quarterback to attempt at least 200 passes and throw fewer interceptions than Smith.

Mahomes and the Chiefs dominated this one. Mahomes threw an interception on Kansas City’s first drive of the game, and the 49ers got out to an early 10-0 lead, but then the Chiefs turned the jets on and lit up the 49ers for 44 points. Mahomes threw for 381 yards and three touchdowns, Mecole Hardman had a rushing and receiving touchdown, JuJu and Valdez-Scantling each recorded 100+ yards, and Kelce was two yards shy of reaching that milestone as well.

The 49ers continue to be held back by their quarterback. Jimmy G threw for 300 yards, but that doesn’t tell the whole story. He seemed to be in a constant panic whenever throwing the ball and consistently missed open receivers. He either under or overthrew his target or completely overlooked an open receiver and tried to a force a throw that wasn’t there.

Kenny Pickett has shown flashes of his potential to be the Steelers’ franchise QB, but he continues to be a turnover machine. With three interceptions on Sunday against the Dolphins, he now has seven turnovers in four starts. Tua wasn’t very accurate in his first game back from concussion protocol, but Raheem Mostert ran the ball effectively. Both defenses played a solid game–each team only scored one touchdown–and in the end, it came down to who made fewer mistakes. With the game on the line, Pickett threw an interception in the endzone with 25 seconds left in the game to seal the victory for the Dolphins.

Tried to warn Mac Attack last week that his job was in jeopardy, and after three disgusting drives, Belichick benched him, and Zappe Hour was back in effect. At least for a couple of drives, anyway. The Patriots scored a touchdown on Zappe’s first two drives, but it all went downhill for New England after that.

Zappe threw two interceptions, and the Patriots were never able to get the ground game going against a Bears defense that has struggled to contain the run game all season. The Bears’ defense had a dominant performance, forcing four turnovers and holding a Patriots team that averaged 29 points per game over the last four weeks to just 14 points.

Justin Fields made some impressive throws, used his legs to extend plays, and rushed for 82 yards and a touchdown. After Zappe led the Patriots on two consecutive scoring drives, the Bears scored 23 unanswered points to cap off an interesting yet weird Week 7 in the NFL.

*Joe Burrow. Joe Cool is back, and he’s not playing with ya’ll. Back-to-back weeks with 300+ yards and three touchdowns but this time, he threw for 481 yards and also snuck in another rushing touchdown in a dominant performance against the Falcons.

*Patrick Mahomes. Mahomes is God’s gift to football. Coming off an ugly loss against the Bills, Patty Mahomeboy lit up the 49ers for 423 yards and 3 touchdowns.

*Kenneth Walker III. Walker COOKED the Chargers on Sunday. Talk about a breakout game; the rookie had 168 rushing yards on 23 carries and two touchdowns in a 14-point victory over the Chargers.

*Josh Jacobs. Jacobs continues to run amok and barrel his way through defenders. He racked up 158 scrimmage yards and three touchdowns this week against the Houston Texans.

*Daniel Jones. Danny Dimes is firing on all cylinders. He’s playing within the system, making the right decisions, and utilizing his legs to lead the Giants to victory. He rushed for 107 yards on 11 carries and recorded a rushing touchdown to go with 202 passing yards and a touchdown.

*Kenny Pickett. An interception in the endzone with the game on the line is not something you want to see from your “QB of the future.” Pickett has talent and potential, but he’s gotta protect the ball!

*New York Jets. The Jets won, but they make the list, not for anything they did wrong but because the football Gods continue to be cruel to this franchise. Breece Hall is a special talent and had elevated the Jets’ offense the past few weeks, but on Sunday, he suffered a season-ending knee injury, and now the Jets must rely on Michael Carter.

*Green Bay Packers. The Packers stink and are one of the worst teams to watch this season. At this point, I’d rather be a Chicago Bears season ticket holder than watch another Packers game. Losing to the bumass Commanders and going on a three-game losing streak is just unacceptable, disgusting behavior.

*Tampa Bay Buccaneers. Tom Brady has been inefficient and unreliable in his age-45 season, and Todd Bowles is proving he shouldn’t be a head coach in the NFL. it may be time to start considering a fire sale and getting ready for life at Brady.

*Jimmy G. Just watch the tape. He’s one of the worst QBs of the 21st century but gets so much love because of his team’s success. If the 49ers had a real quarterback, they’d have a much better record and would’ve actually stood a chance against the Chiefs this weekend.

*Roquan Smith. Smith recorded 12 tackles, one sack, one deflected pass, and an interception as the Bears’ defense dominated the Patriots.