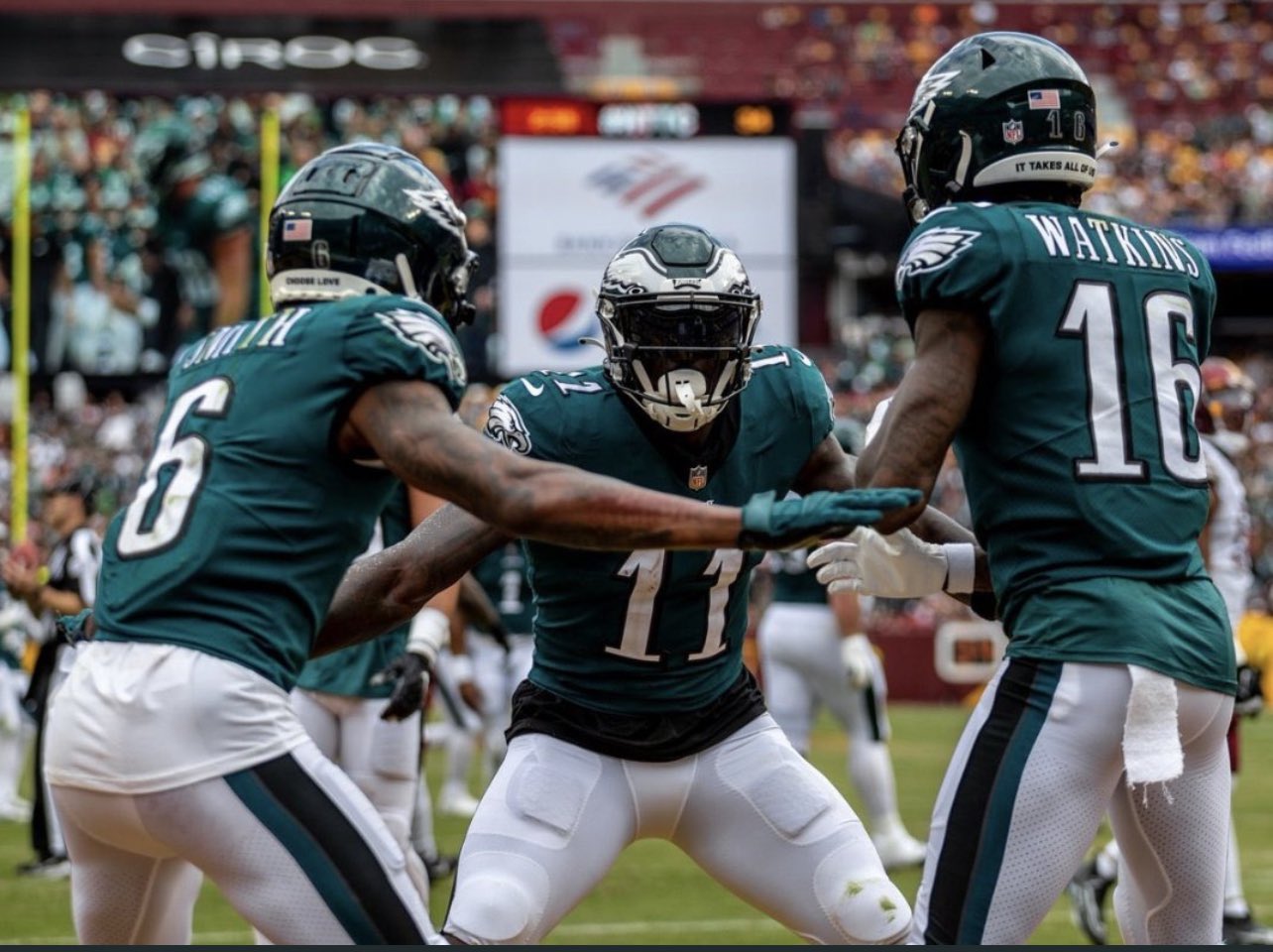 We are now a quarter into the season; we’ve got breakout offenses like Philly, surprising possible QB1 in Trevor Lawrence, and fantasy football duds from normal studs like Brady, Wilson, and Ekeler.

This is also a week with injuries; no D’Andre Swift, Amon-Ra St. Brown, David Montgomery. With the uncertainty of Dalvin Cook and Alvin Kamara looming as well. There is still a long way to go, your fantasy football season isn’t over, but you need to start racking up the wins now. I’m going to do my best to guide you to those wins.

Hurts has been playing like an NFL MVP candidate, and while Jacksonville’s defense has played well, the Philly offense will be too much to stop.

Lawrence has looked really sharp the first three weeks, showing why he was so highly touted. I believe he keeps his ascension going, but it won’t be an easy matchup.

He’s got to break out at some point… right?

He played last week through the injury and made it out safely, and I feel comfortable starting him this week as opposed to last week.

I originally had him in the sit category, but with Mike Evans back, possibly Chris Godwin back as well, I feel like this would be the game that TB shows us why he came out of retirement.

I originally had him starting, but with Amon-Ra and D’Andre Swift out, I became a little skeptical.

Cousins has struggled of late, the Saints are really talented, and they haven’t given him problems before.

He’s had some highs and some lows. Sit until the highs are consistent.

Do not start him until he gives you a reason to, i.e., Lawrence.

Coming off an injury, Pittsburgh is a tough draw. We haven’t seen him play yet, so let’s be cautious and patient.

This is who the Bears’ offensive coaches wanted playing along, and I expect him to have a big game. Both in the air and on the ground.

No brainer, even if the Falcons run defense has been good this season.

Saquon is currently RB1, and in one of my leagues, he was drafted 26th. A favorable matchup against Chicago, who has given up 4.9 yards per carry to running backs this season.

I find it hard to believe that Najee won’t have a great game against the New York Jets.

The Chargers won’t get blown out again, so Ekeler will be able to touch the ball more naturally, given the time and score.

More rumors of Rhamondre taking over the RB1 spot.

Tampa’s run defense against an inconsistent running back? Give me Tampa Bay.

Both are dealing with an injury, and I would sit them if they are active. One bad hit to the ribs or shoulder, and they are out for the game.

He performed really well last week, and he needs to prove he can do it again.

He is likely matched up with rookie Sauce Gardner; I’m looking forward to this matchup.

AJ Brown has been unreal through three weeks; that doesn’t change in week four.

No Michael Thomas, Jarvis Landry questionable. Olave has 29 targets through three weeks, with them in the lineup. I expect another big game from the rookie.

Pittman Jr is the clear number one receiver in this offense; if he plays, start him.

He had a few drops last week but made up for it with a one-handed touchdown catch. Against a Washington defense that got dominated last week, he has a favorable matchup.

DJ Moore only has SEVEN catches through three games.

With Zach Wilson returning, it’s unknown what the target share will be between Moore and Garrett Wilson.

This is a real boom or bust play, and I don’t have enough trust that he’ll have a great game against Tampa’s defense.

He has twelve targets on the year, and Kupp and Higbee have dominated the target share.

Without Amon-Ra and Swift, Hock could have a career game.

Zach gets a lot of targets every week and is TE4.

Higbee has 24 targets through three games and is TE7.

I know people are worried about Pitts, but he got 8 targets last week. That is a step in the right direction. He will score a touchdown this week.

With no Renfrow, it opens up even more opportunities for Waller.

He doesn’t seem to be as big a part of the offense as advertised.

The same should be said for Albert O.

I don’t think Everett is going to be a guy that gets a lot of looks from week to week.

Whether it’s Mac Jones or Brian Hoyer, I would sit him.

He is coming off missing a week, and we don’t know his rapport with Cooper Rush yet.

The Chargers’ defense has to come together and show out at some point; why not against Davis Mills?

Wentz was bad last week. If he continues his struggles, this is the defense you want in your lineup.

The Titans’ offense hasn’t been very good, so this could be low scoring, and with a few turnovers, it’s a great day for the Indy defense.

Justin Fields hasn’t really been able to get a rhythm. I don’t see this being the week that he does.

I think the Chargers have an all-around great game.

This will be a high-scoring, back-and-forth affair, and neither defense should be in your lineup.

Tampa’s defense is great, but Mahomes has some unfinished business, and I think he lights them up.

The defense looked terrible last week, so I would sit to be cautious.