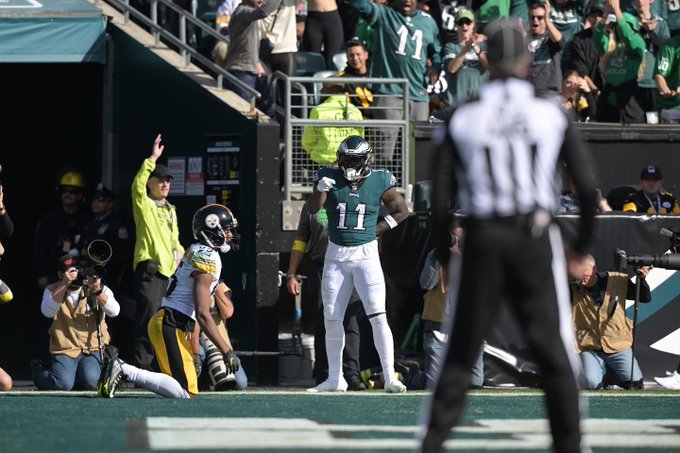 We are back with some more fantasy football advice. We missed out last week, but we’re back better than ever. Jalen Hurts was incredible last week, and the Eagles traded for Robert Quinn at the trade deadline.

The Texans were in talks to trade Brandin Cooks but couldn’t come to an agreement. Both teams are headed in completely opposite directions. The Texans do have young talent in Dameon Pierce, Derek Stingley, and Jalen Pitre, but there’s so much talent on the Eagles. Both teams have players capable of producing fantasy-wise, so let’s help you make the right decisions.

Sit. Even in a 2-QB league, I wouldn’t start him. He hasn’t been a real producer fantasy-wise, and there’s no reason to believe he will against this Eagles defense.

Start. I have some doubts about this, but the Texans have run the ball well this year. He only has two games under 40 rushing yards, including one last week. But he still contributed with three catches and a touchdown. His volume says he’s a starting RB1/2.

Brandin Cooks and Nico Collins are both officially out. Don’t start any of their receivers in standard leagues. If you happen to be in a deep league, Chris Moore and Phillip Dorsett would be the two players you pick up.

Sit. There’s no real number-one tight end on this team, and Jordan has just 15 targets all year. He’s probably not on your roster unless you are in a deep league or dynasty.

Sit. The Texans have a young talented secondary, but I don’t foresee them being able to keep with AJ Brown, Devonta Smith, and co.

START. He’s QB4 on the year and coming off his best passing performance of the season. He threw for 285 yards and four touchdowns. And according to Brown’s fellow receivers, it should’ve been five, but he got chased down by Minkah.

Start him if he is your RB2, but I wouldn’t leave him in the FLEX spot. He does five double-digit weeks out of eight, but his production is based on the game. This could be a game where it gets out of hand quickly, so he could end up having a good game.

Start. Brown is the clear number one guy and continues to build trust with Hurts every week. Hurts threw contested jump balls to Brown last week, and he delivered. I expect Hurts to continue to throw them.

Start if he’s your WR2; Smith is hard to gauge. He’s got three single-digit games and five single-digit target games. He’s also in play for a big game or a long touchdown; if he’s in your lineup, you should be confident.

Start. There’s a lot of love to go around in the Eagles offense, but Goedert has a solid role. He’s scored double-digit points in six of the eight games this season.

Start. The Eagles are a must-start against a young struggling quarterback like Mills and a team without many weapons. With Cooks now out, it’s an even bigger uphill climb for the Texans’ offense. After picking up Robert Quinn, the defense should be even better. Expect some takeaways from Philly in this Thursday night matchup.