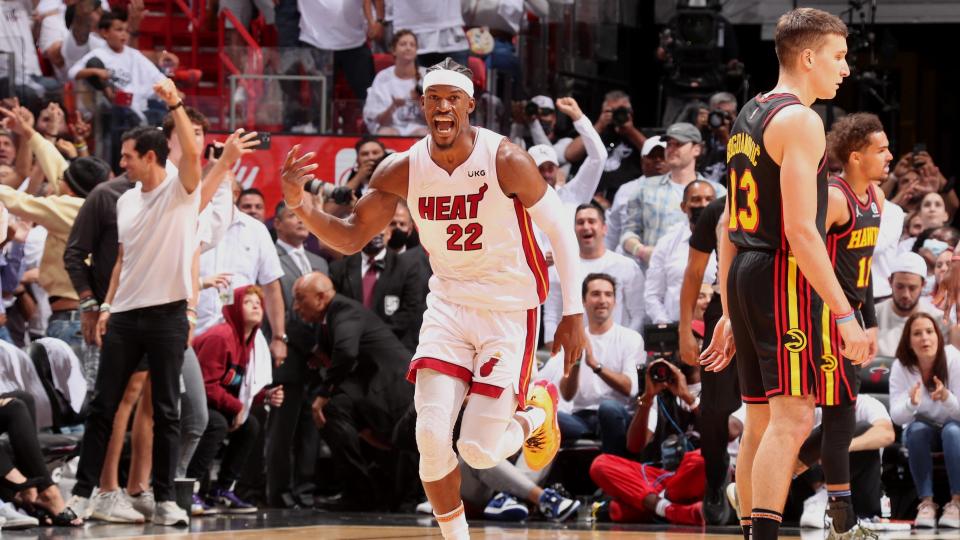 If this year has shown you anything, it’s not to count out the Miami Heat. This season was one of my favorites as a Heat fan. Dwyane Wade is who made me fall in love with the game of basketball. I watched him from the 2005 season until he retired. Obviously, I was here for the Big Three years. And I was here after Lebron left, and most left us for hyperbolic “dead.”

This season was entertaining because we had so many players step up and win us games throughout the season, from undrafted players to two-way players, to Covid emergency players.

The Miami Heat shocked the basketball world by stealing the number one seed in the Eastern Conference.

Most who cover the sport, including myself, had Miami in the four-five seed range. Man, am I glad I was wrong. We started the season with a 42-point blowout over the defending champion Milwaukee Bucks. The first 20 games were a mix of Jimmy Butler, Bam Adebayo, and Tyler Herro playing great basketball.

Tyler Herro leads the shorthanded Heat to a win in Phoenix pic.twitter.com/yG6DCYPYof

After falling to Denver to sit at 13-8, Miami found themselves without Butler and Adebayo. There was an enjoyable stretch of our role players having great games. Two-Way contract player Caleb Martin scored 28 points in a win over the Bucks. Duncan Robinson, the next game, scored 26 points to beat the Bulls. Two games later, Gabe Vincent scored 26 points and hit the eventual game-winning three with 30 seconds left against the 76ers. Max Strus scored 32 in the next game against the Magic. Herro continued his Sixth Man of the Year campaign with back-to-back 26 and 29-point games and a 33-point game to beat the Suns in Phoenix. We even got contributions from players like Omer Yurtseven.

Also, Bam Adebayo should’ve been Defensive Player of the Year!

Bam Adebayo does it all on defense, as tracked by #NBACourtOptix powered by Microsoft Azure!

We carried the outstanding play from everyone to a 53-29 regular-season record and the number one seed in the Eastern Conference. The Play-In Tournament set them up for a matchup with the Atlanta Hawks. They got past them in five games, but it should’ve been a sweep. Miami moved onto the second round against the 76ers.

An injury to Joel Embiid kept him out of the first two games of the series, but he returned, and the series was split 2-2. James Harden had a tremendous game four and then disappeared in the deciding game six. The Heat were in the Eastern Conference Finals, where no one had them at the beginning of the season.

A tough matchup against the Boston Celtics was on the horizon. The more talented team was favored over the number one seed. After trading blowouts through four games, the series was tied 2-2.

Game five was horrendous for Miami. The defense wasn’t bad, as they held them to just 93 points, but the offense was historically bad. Every expert on television had counted out the Heat. Every show on ESPN leading up to the game was previewing a Warriors v Celtics Finals, and game six hadn’t been played yet. Draymond Green himself said they’d be playing the Celtics.

Our team was depleted; if it were a regular-season game, half our team wouldn’t have played. Jimmy Butler and the squad heard the noise. Butler responded with 47 points, nine rebounds, eight assists, and four steals on the road in Boston. Strus had missed 14 consecutive 3-pointers before finally getting a few to fall. Lowry was able to play through the pain and come up huge on both sides. The Heat forced a game seven, and many had to walk back everything they said.

A performance for the ages. pic.twitter.com/MSgGQHsa0T

Game seven started poorly, although Bam started aggressively and kept the game within reach going into the second quarter. Jimmy had an 18-point second quarter that brought the deficit to six points. The third quarter was shaky as they couldn’t get within three but kept coming back and fighting. Max Strus had a 3-pointer taken away that started the third quarter. This was multiple possessions later; when they went to look to make sure it was a three, his foot hovered the out-of-bounds line, taking away the points. It was five minutes later in real-time.

Going into the fourth quarter, it was obviously make or break. The Heat didn’t give up until the very last possession. They were down 13 with three minutes left, and it seemed to be over, and fans were leaving. We’ve seen this happen before. Miami went on an 11-0 run, cut the lead to two, and got a stop. Jimmy missed a pull-up three that would’ve put the Heat up one with 15 seconds left. Boston went and made two free throws and went up four, and that was the game.

The 2021-2022 Miami Heat were a shot away from the NBA Finals. Despite injuries all season and during the playoffs. Despite the talent gap seeming insurmountable. Heat Culture isn’t a moniker; it’s what the Miami Heat organization is built on.

Every year the organization expects to compete for a championship. They hold their players to a different standard. Ask anyone who has put on a Heat uniform. Miami isn’t going away. They aren’t done, and they have not been left for dead.

I am proud to be a Miami Heat fan and proud of how the team played all season. They will be back and back at the top of the league once again. A few roster tweaks and a healthy roster can get over the hump. Thank you.